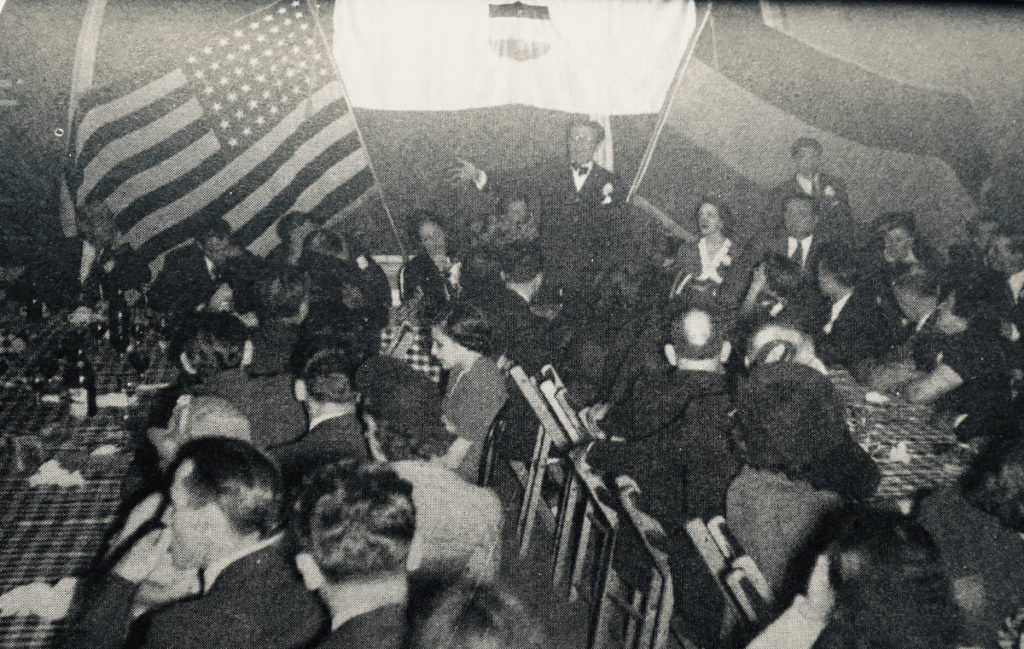 The Spanish Civil War was passionately followed in New York. The American press, writers, politicians and civil associations campaigned for both sides. Aid was sent especially to the Republicans, for example by American Friends for Spanish Democracy and the Black Committee to Aid Spanish Democracy in Harlem.

The Spanish community in New York acted similarly. Since the Galicians comprised the biggest group among the Spanish migrants, they were at the forefront of many of these initiatives. A notable example was the Frente Popular Antifascista Gallego (Galician Popular Antifascist Front), which according to the exile Emilio González López was founded in 1937, in a meeting that took place at the “Centro Galicia” located on Columbus Avenue. One of their great achievements was the shipment of four ambulances, which were given the names of the four Galician provinces. The FPAG also brought Galician politicians to New York in order to raise funds and gather support for the Republican government.

As part of this campaign, the artist, writer and politician Alfonso Daniel Rodríguez Castelao arrived in New York in 1938. On August 14 he began his American tour in a crowded festival organised by the Sociedades Galegas Unidas (United Galician Societies) and the FPAG, where he gave his famous speech in Ulmer Park.  The choice of inviting Castelao was not accidental. He was well-known as Galician artist and writer, and his name featured frequently in the Galician-New York newspaper La Voz (The Voice), created by the also Galician (from Vigo) Ceferino Barbazán. True to its motto “For social justice. For Democracy. Against Tyranny and Fascism”, the newspaper published, for example, Castelao’s letter “To the anti-fascist Galicians of New York”, which was read by his fellow Galician politician Bibiano Fernández Osorio-Tafall (also invited by the FPAG) in the premises of the “Centro Gallego” (Galician Centre), based on Columbus Avenue. Later, on August 16, La Voz published the article “The Galician Festival was a total success”, mentioning the enthusiastic reaction triggered by Castelao’s words: “In the last minutes of his speech, when he spoke to his countrymen in their vernacular language, enthusiasm overflowed, as the Galicians heard for the first time the magical words of a man who was able to narrate the tragedy of their charming land in their mother tongue, in such an honest and sublime way…”. The newspaper Frente Popular (Popular Front), published by the Sociedades Hispanas Confederadas (Confederate Hispanic Societies) also referred to the visit of the Galician intellectual in the article “Castelao in Ulmer Park” (19/8/1938), and included an extract from his passionate speech: “Your flesh is the Galician land. Your blood is the rivers that run through the Galician countryside. The fascists do not control Galicia: you carry Galicia in yourselves”.

The activity of Galician anti-fascism in New York went beyond the FPAG. The Sociedades Hispanas Confederadas were created to “organize a front of anti-fascist struggle grouping the largest number of Spanish associations based in the United States” (as María Ángeles Ordaz Romay points out in a 2006 article). The general secretary of the SSHHCC was a Galician from Oleiros, Xosé Castro, who was also president of the Sociedad Benéfica Española (Spanish Benevolent Society), the oldest of the Spanish societies in New York. Within the SSHHCC there were, in addition to the FPAG, three other Galician societies: “Club Coruña” and “Centro Galicia” in New York, and “Muros y sus Contornos” in Newark.

The SSHHCC continued to exist during the dictatorship, albeit with less strength; since their inception they had been affected by internal political tensions and some societies began to abandon the confederation. González López points out that the New York’s “Centro Gallego” was integrated within the Spanish Benevolent Society in 1940. On Castelao’s suggestion, the FPAG became Casa Galicia Unity Gallega, a society that still exists today. However, the Galician presence in the confederation continued in the newspaper España Libre published by the SSHHCC in New York, edited by Xosé Castro.

During and after the war, more exiled Galicians arrived in New York and in other parts of the United States, for example Emilio González López, Ernesto Guerra da Cal, Ramón Martínez López, José Rubia Barcia and Eugenio Granell. The members of this group found work as university professors, and developed an important academic and literary career, in Galician (Guerra da Cal) or Spanish (Rubia Barcia and Granell). As is the case with Spanish exiles based in the United States, literary criticism has referred to them as an “elite” or “luxury” exile, because of the social position they attained thanks to their intellectual training.

However, as Víctor Fuentes (also an exiled professor in the US) reminds us, they all went through the hardships of exile, as is reflected in the pages of their works: the trauma of the war and their displacement, the feeling of loss, nostalgia and pain for the unrecoverable past and their indignation at the international acceptance of the dictatorship. Their literary and human legacy, hidden by the Franco regime and forgotten for decades, began to be officially recovered after the dictator’s death, through tributes and monuments in their hometowns, such as the bust of Emilio González López presented in A Coruña in 2007, on the initiative of the Casa Galicia of New York. 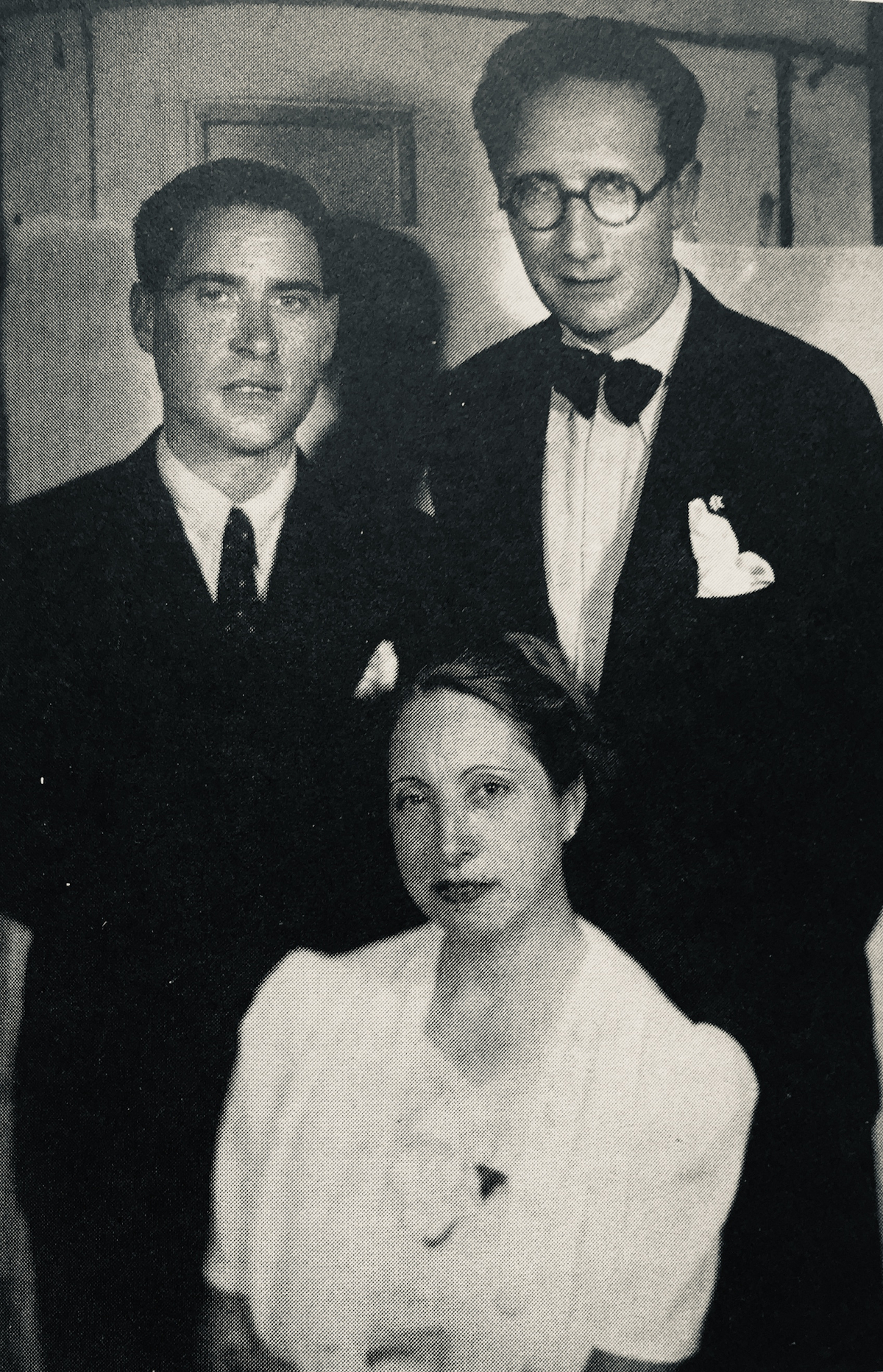 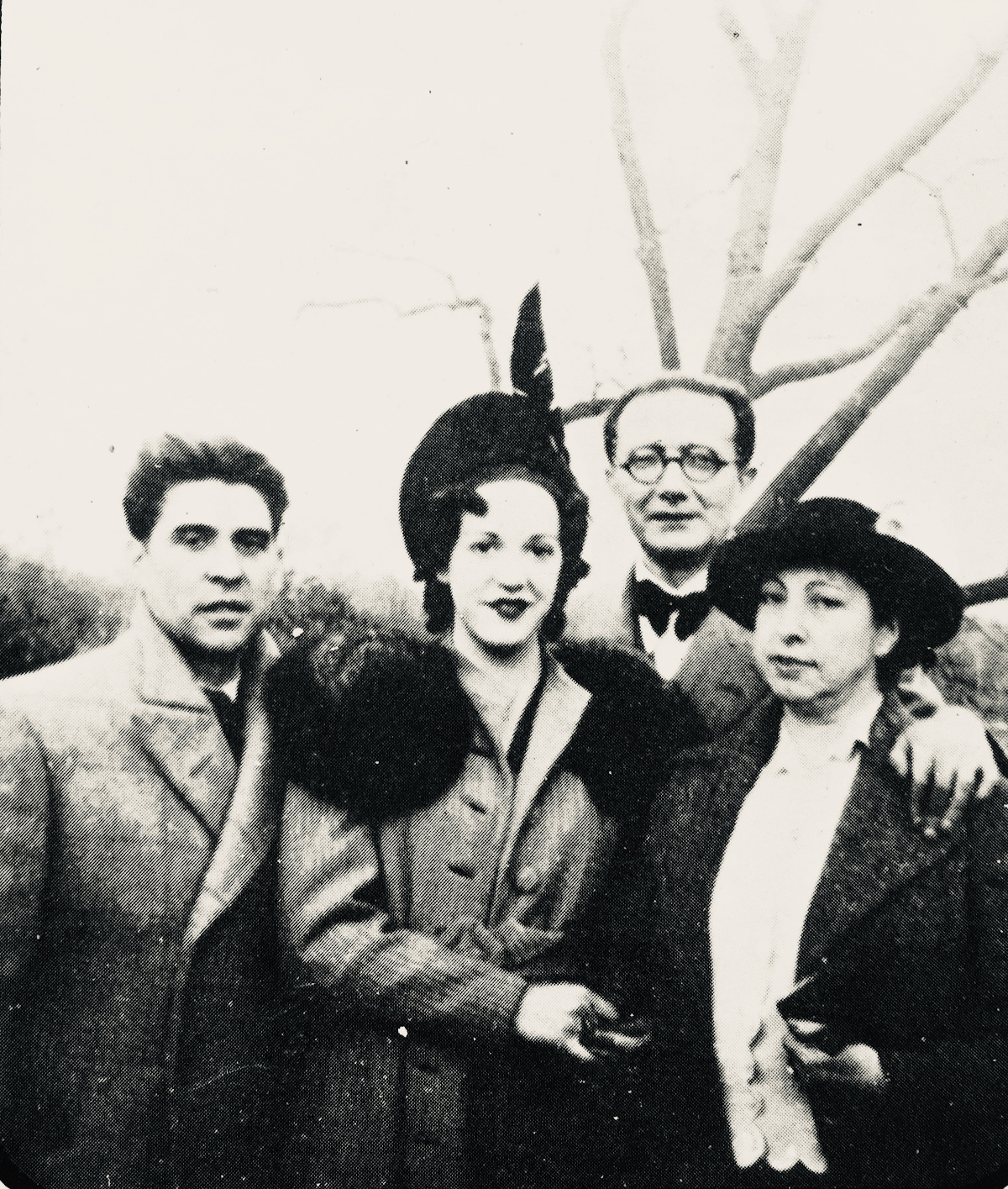 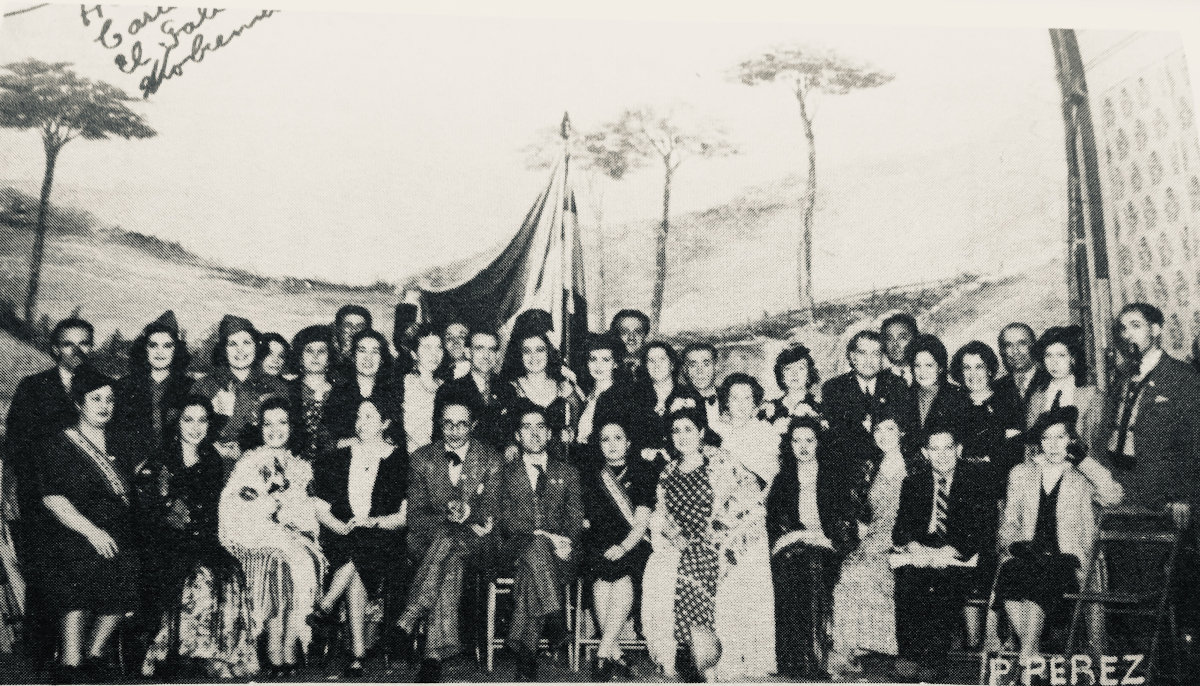 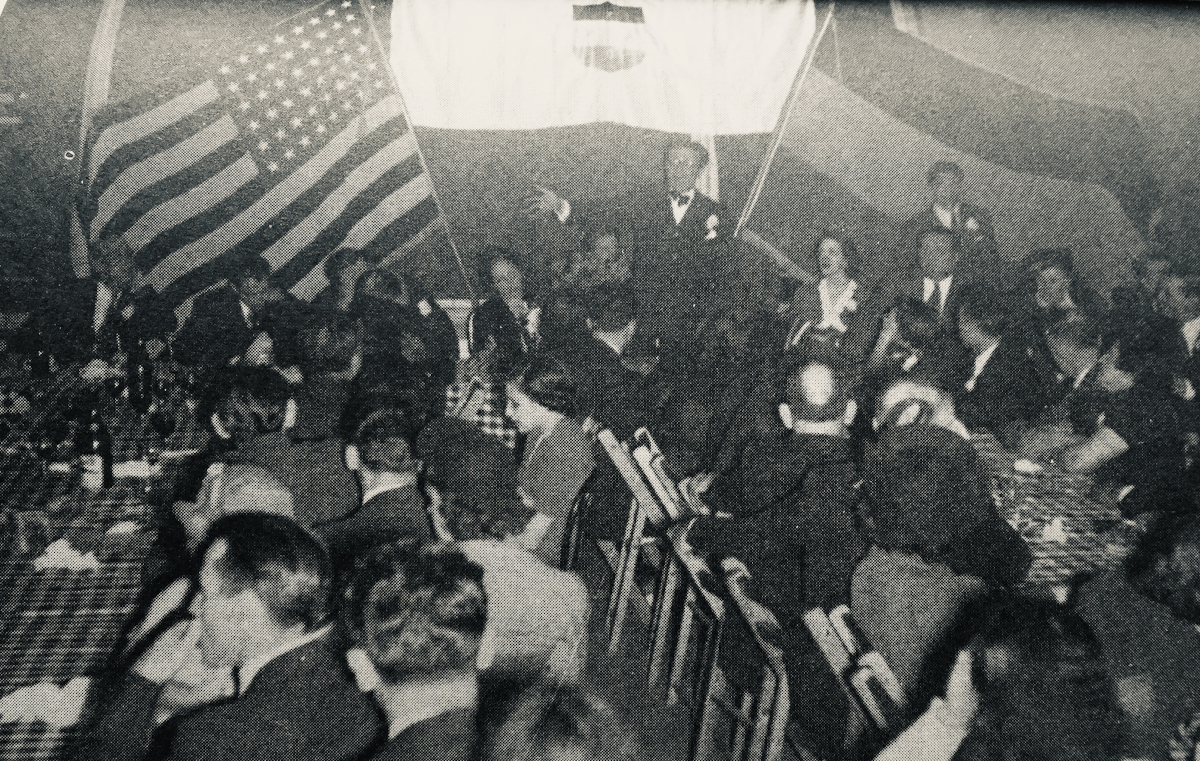 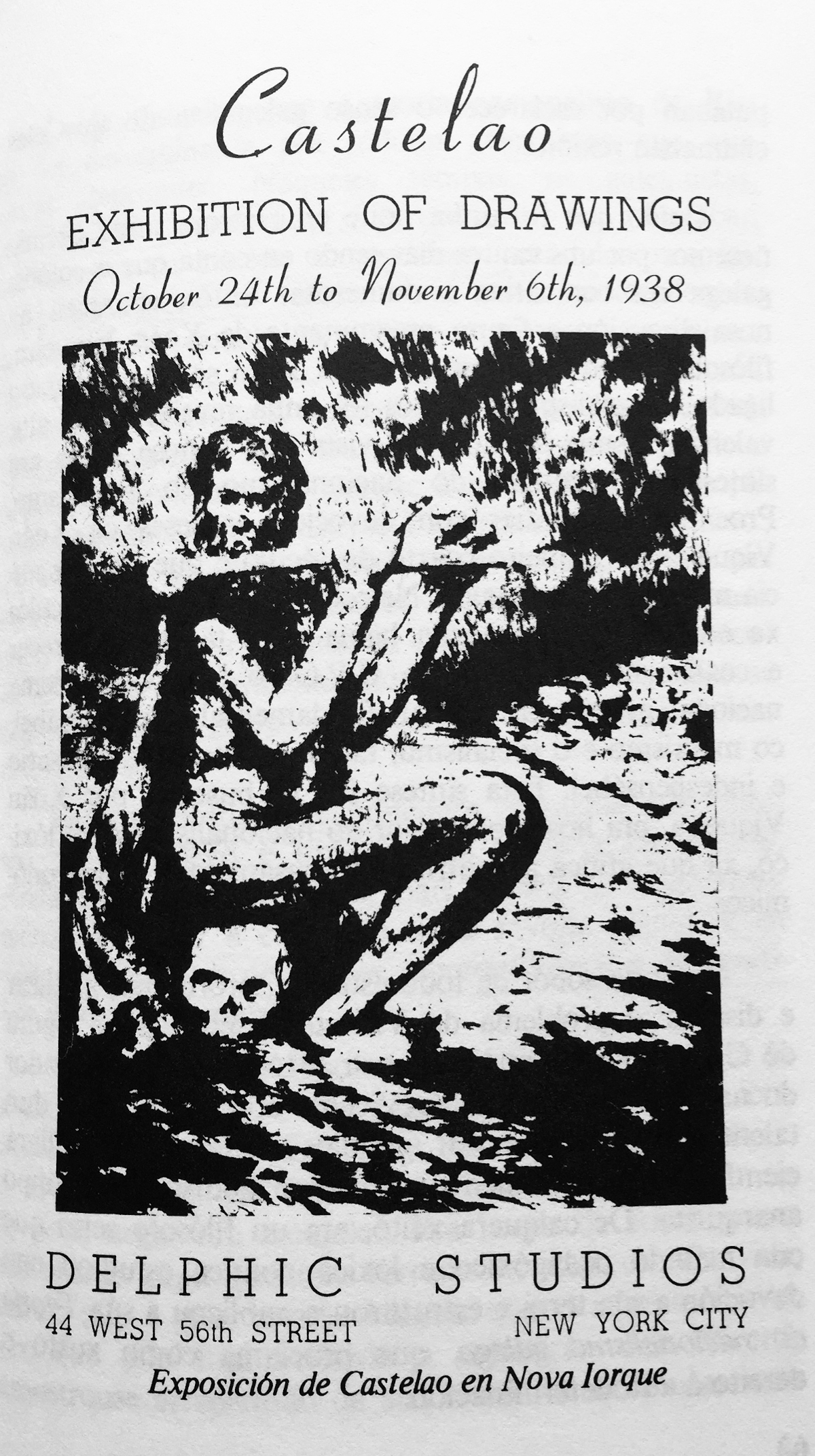 Announcement of an exhibition by Castelao in Delphic Studios, New York (1938), in Luis Soto, “Castelao, a UPG e outras memorias” (1983) 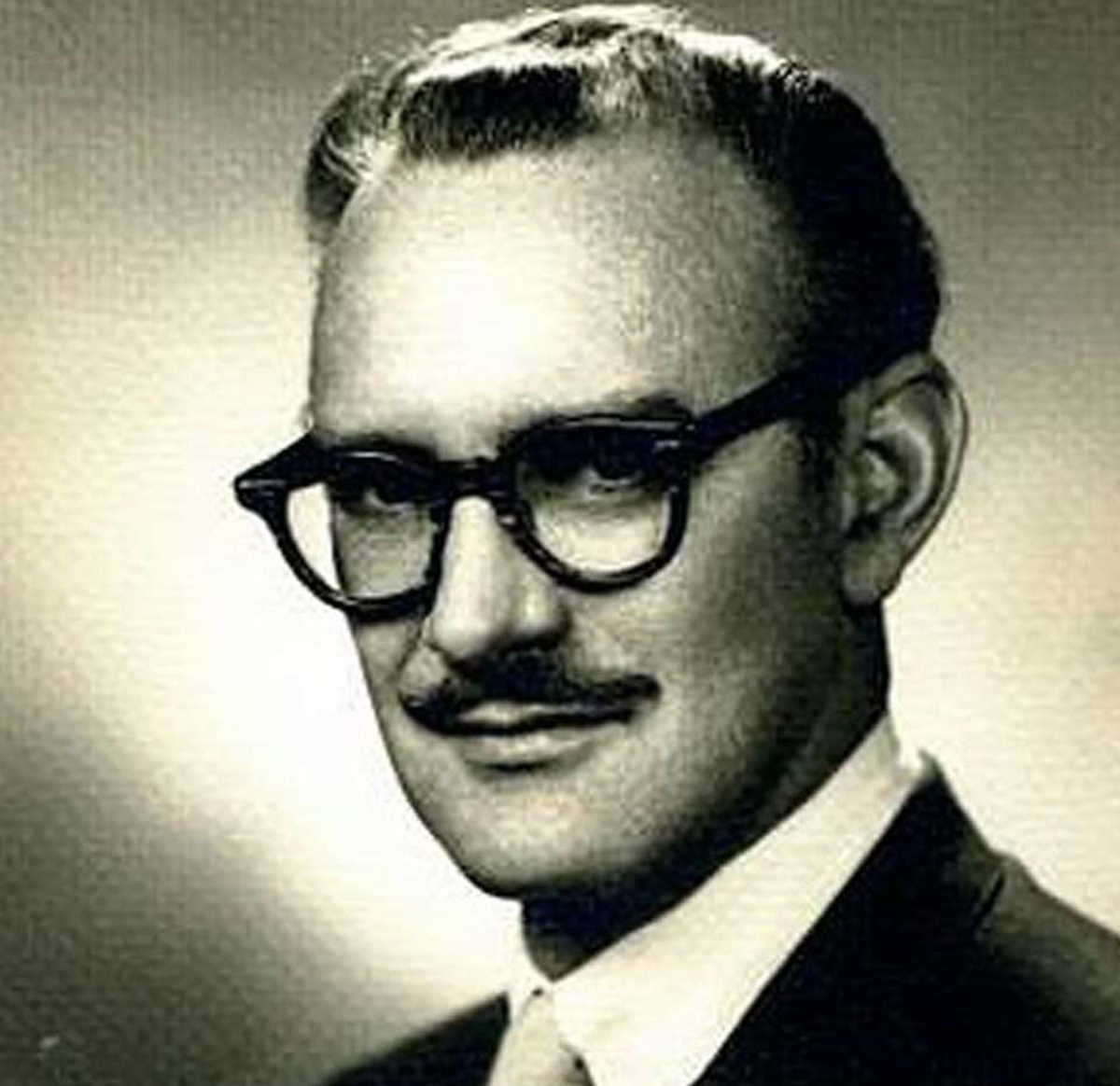 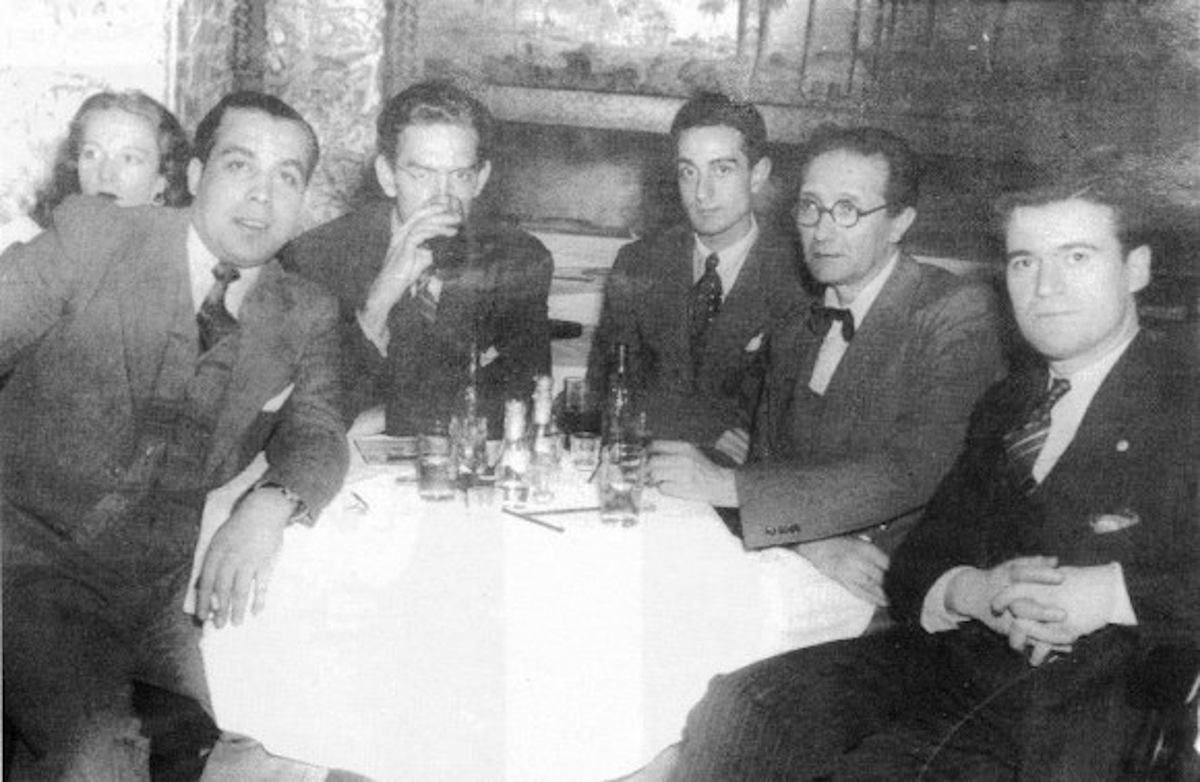 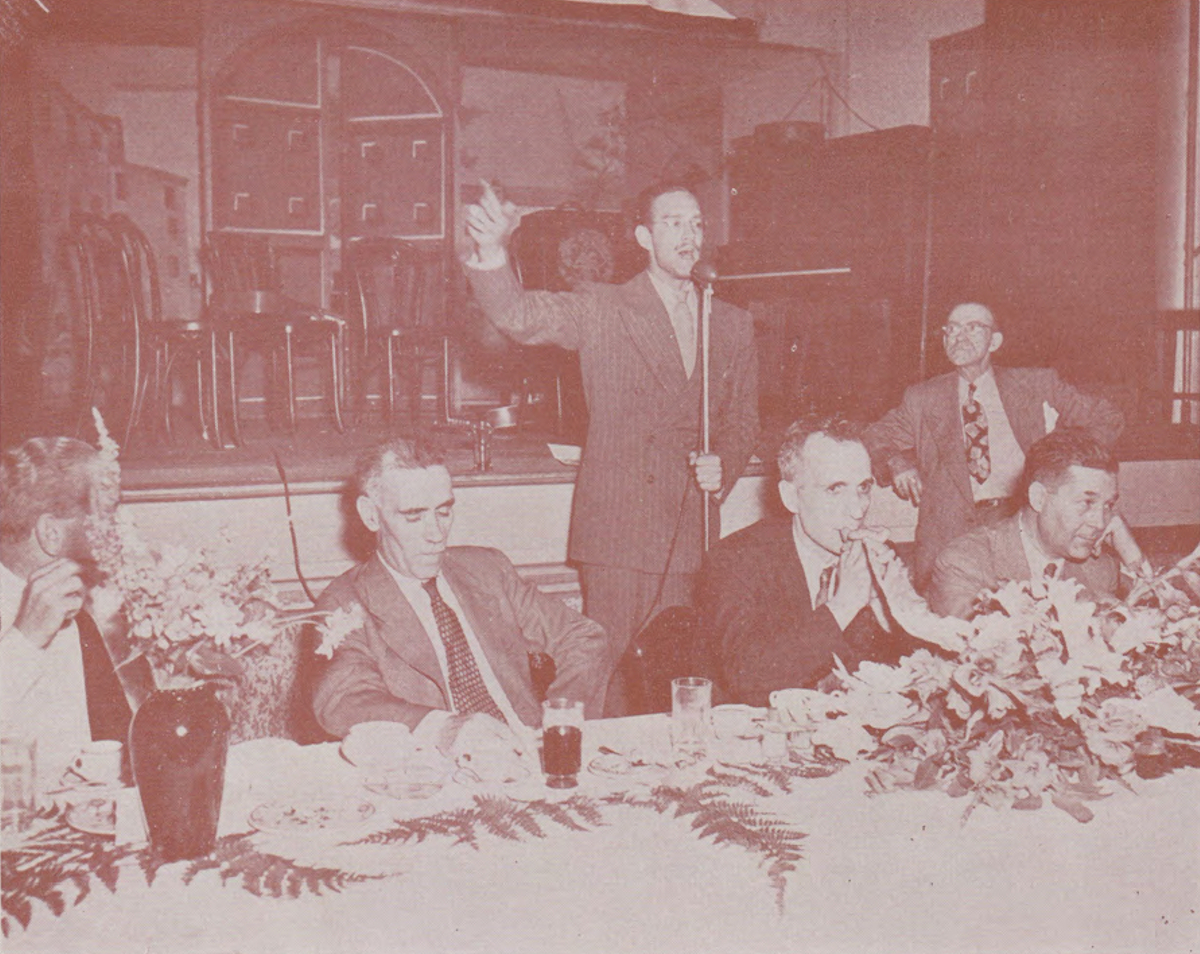 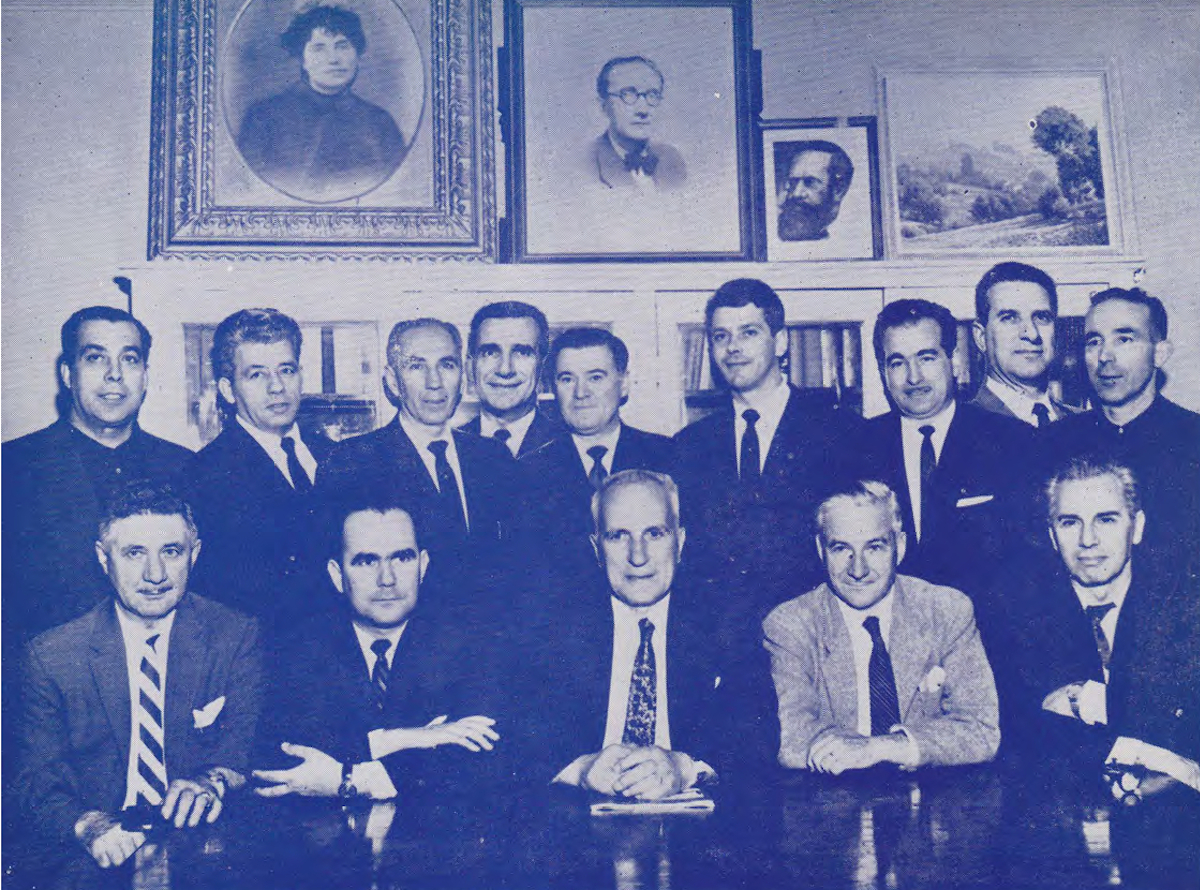 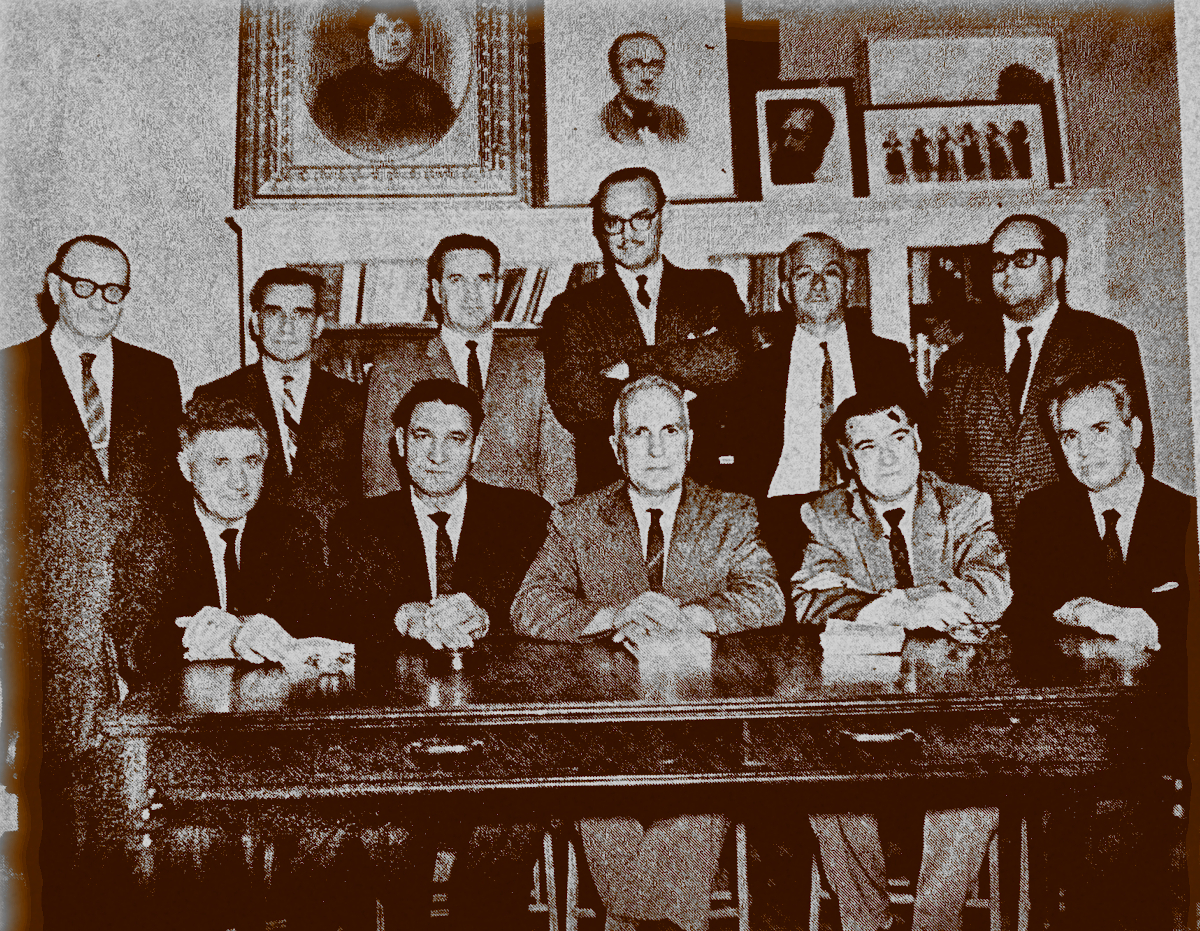 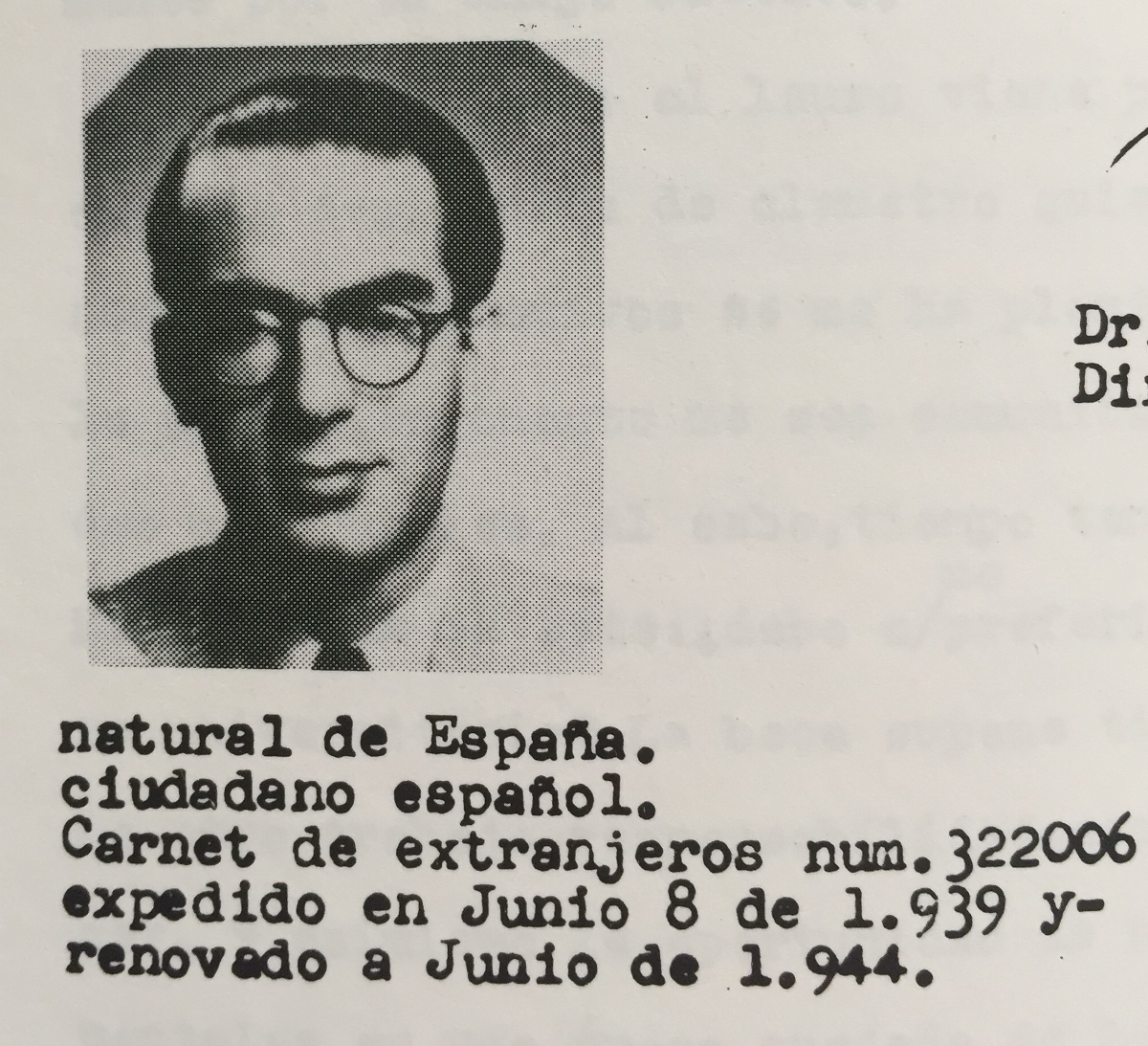 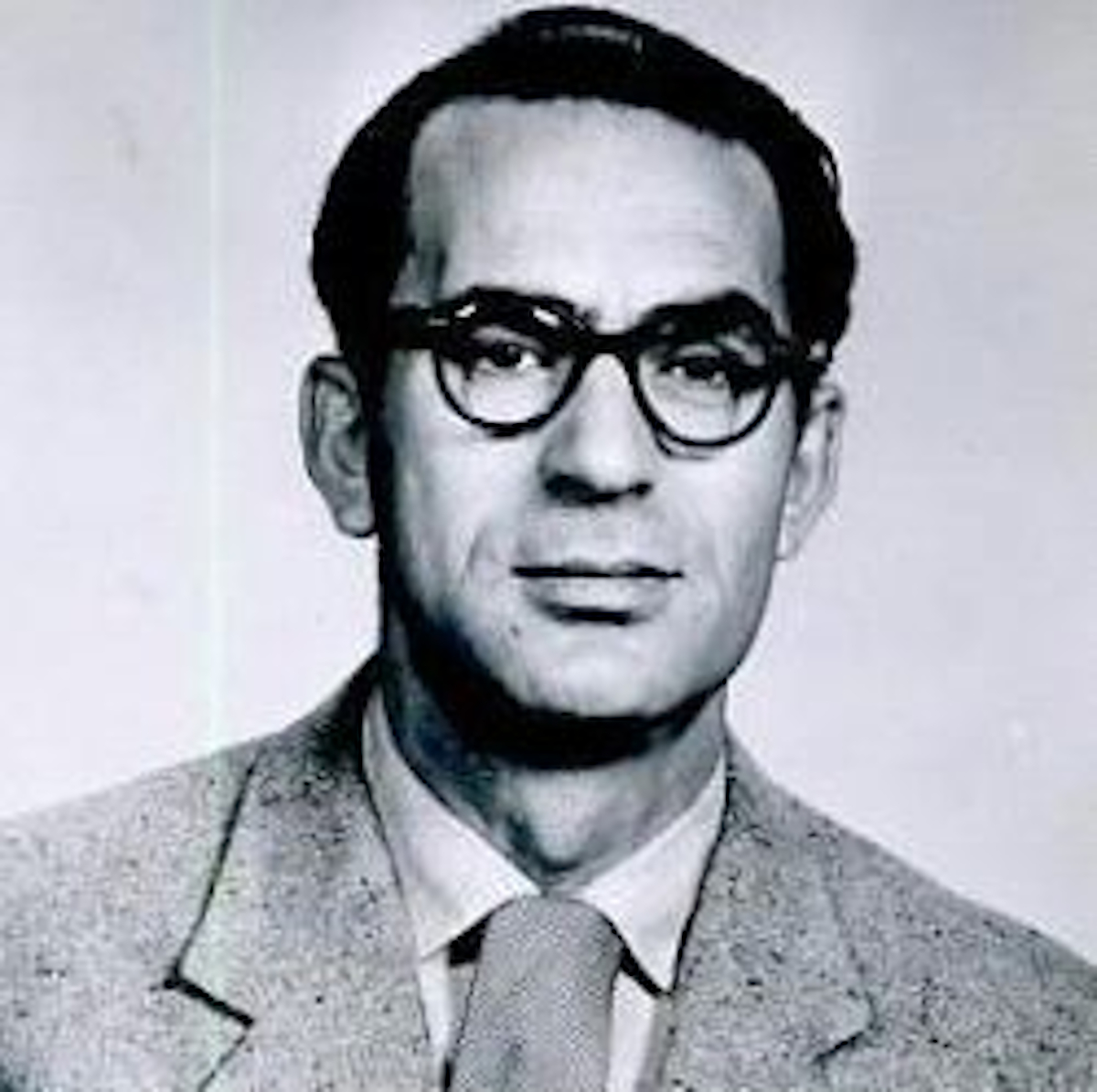 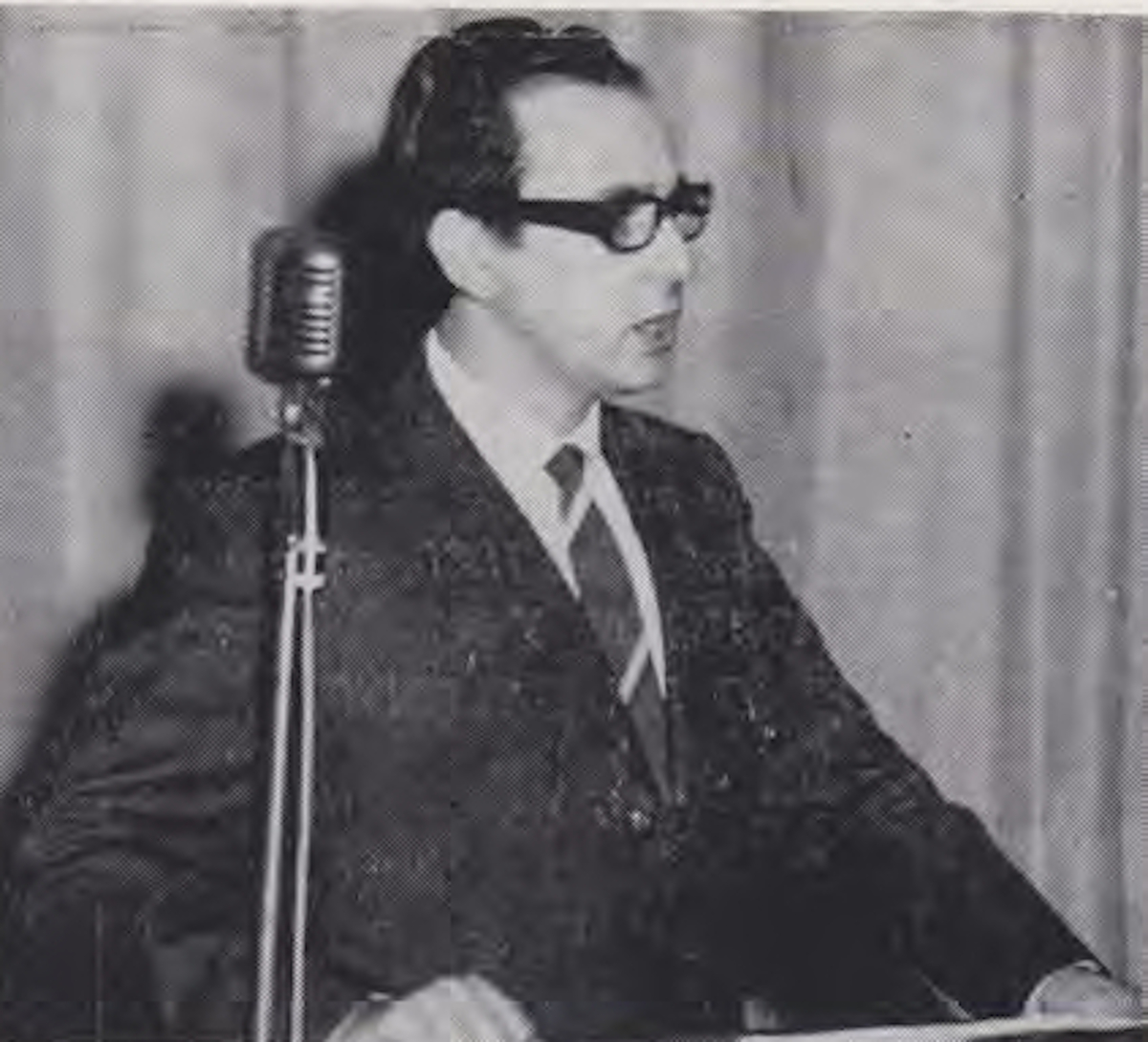 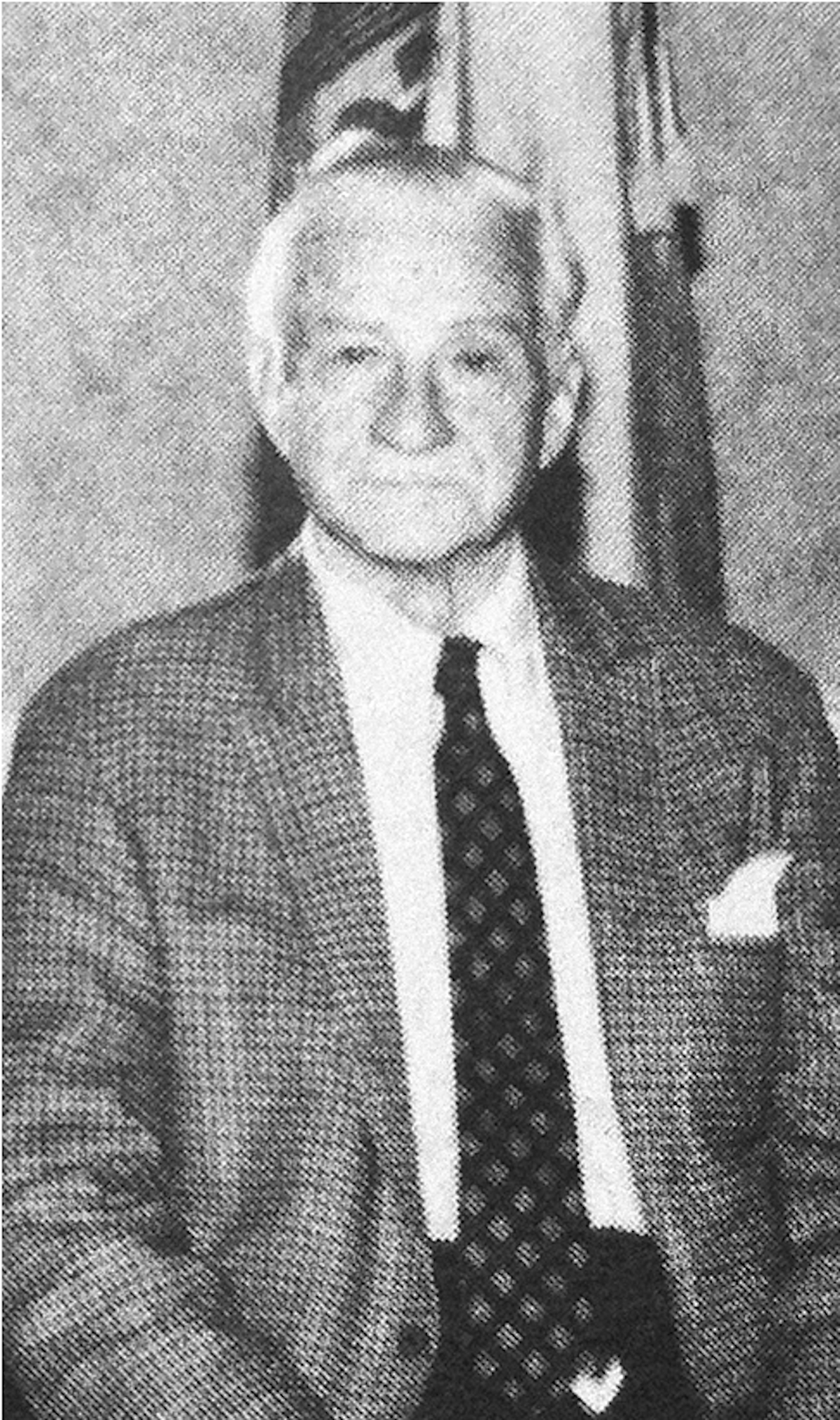 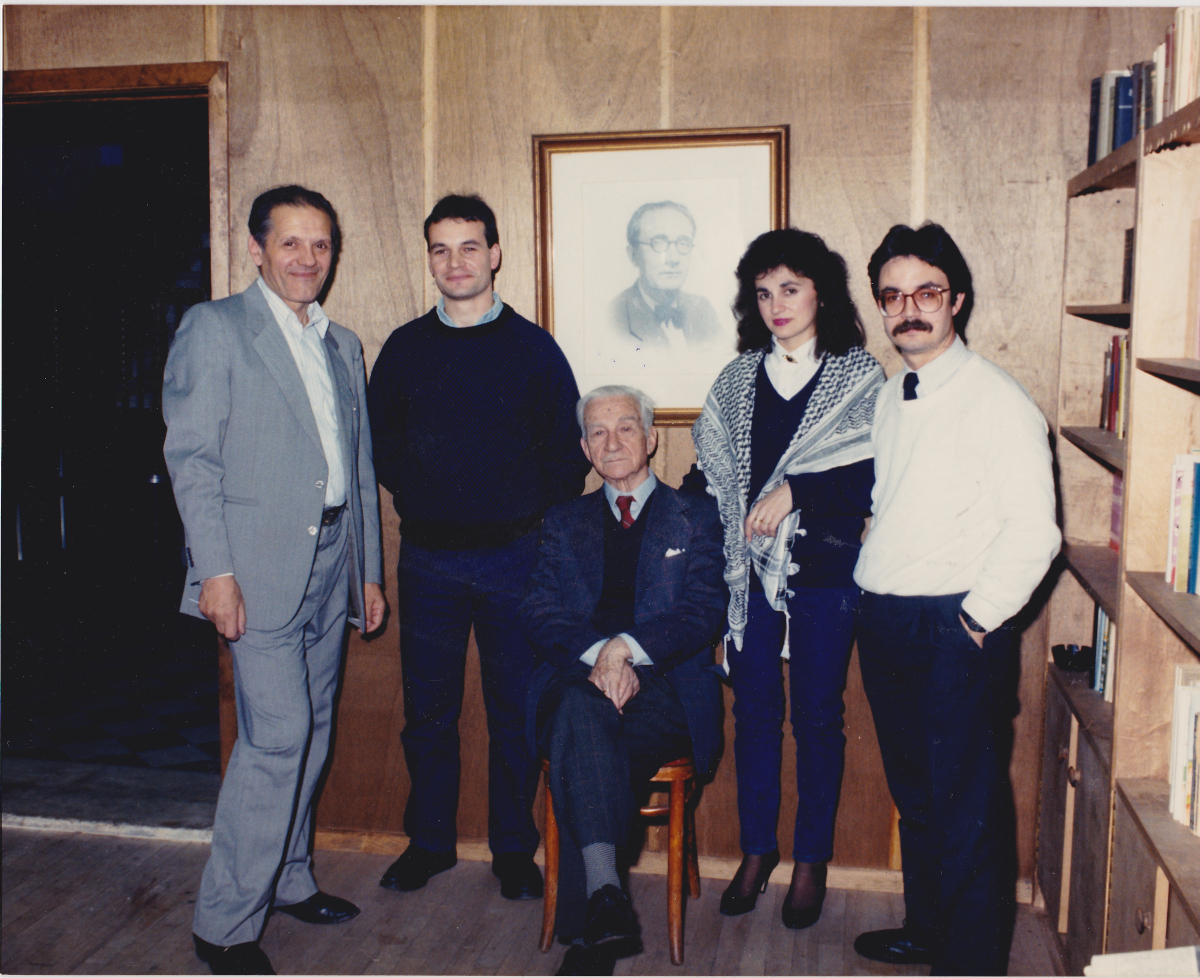 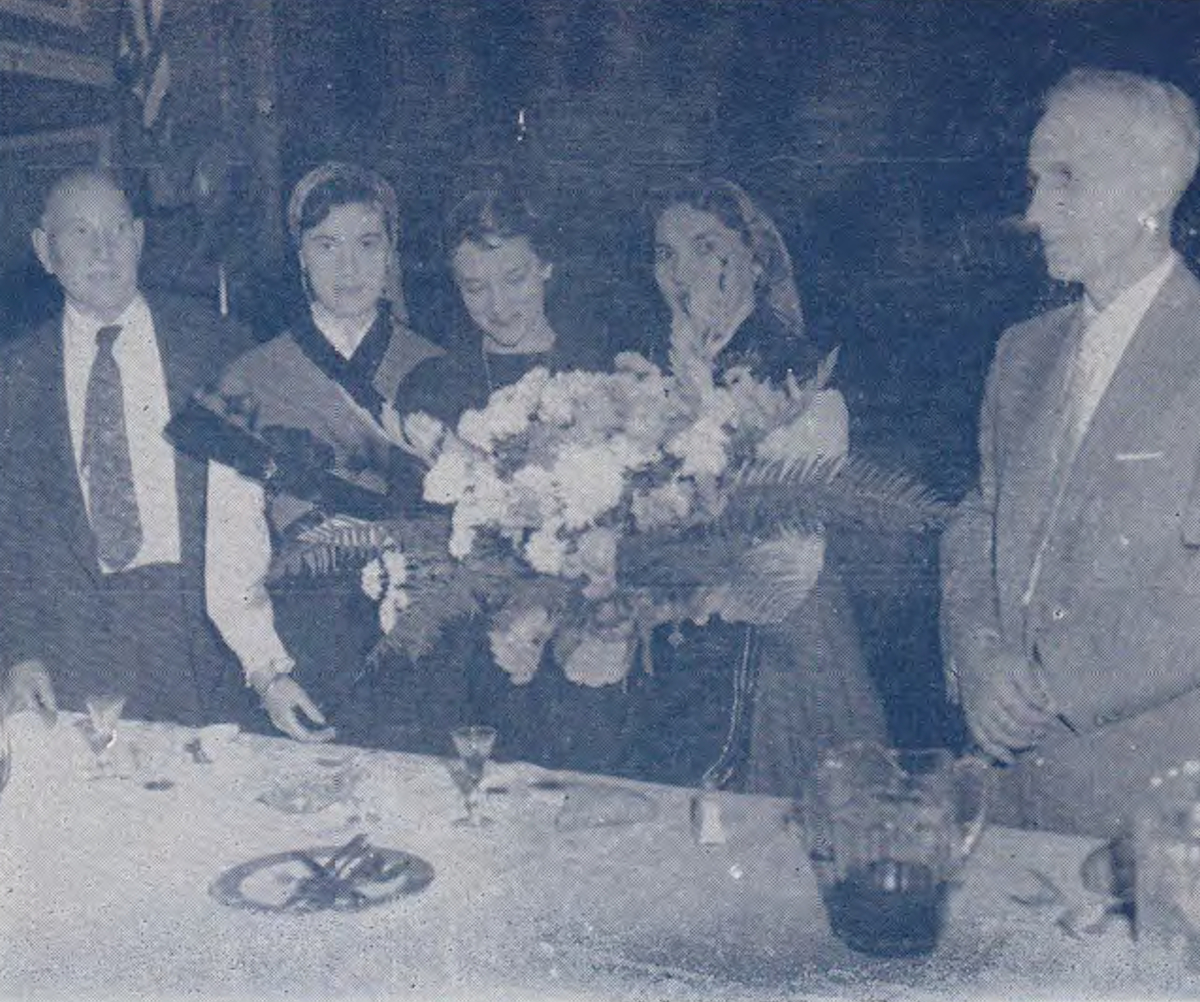 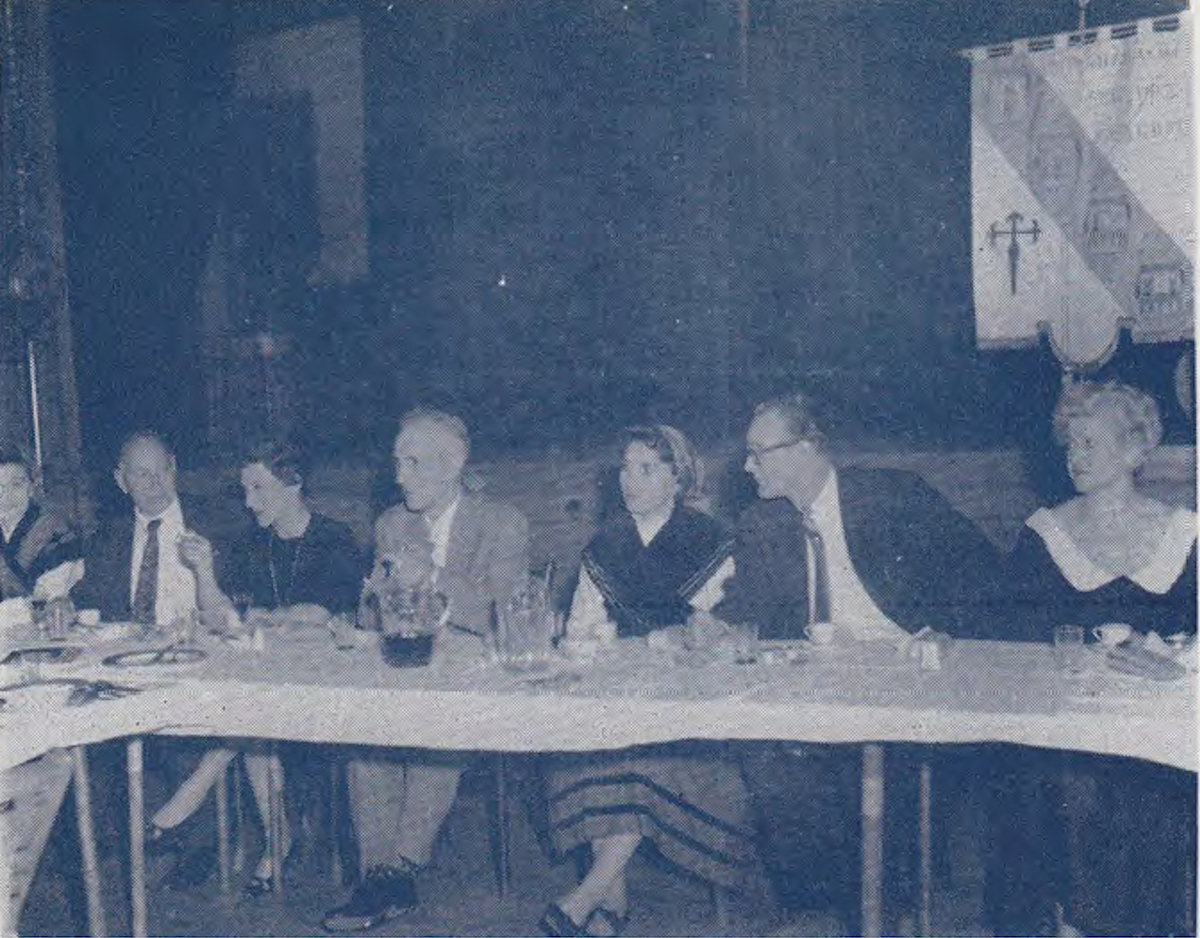 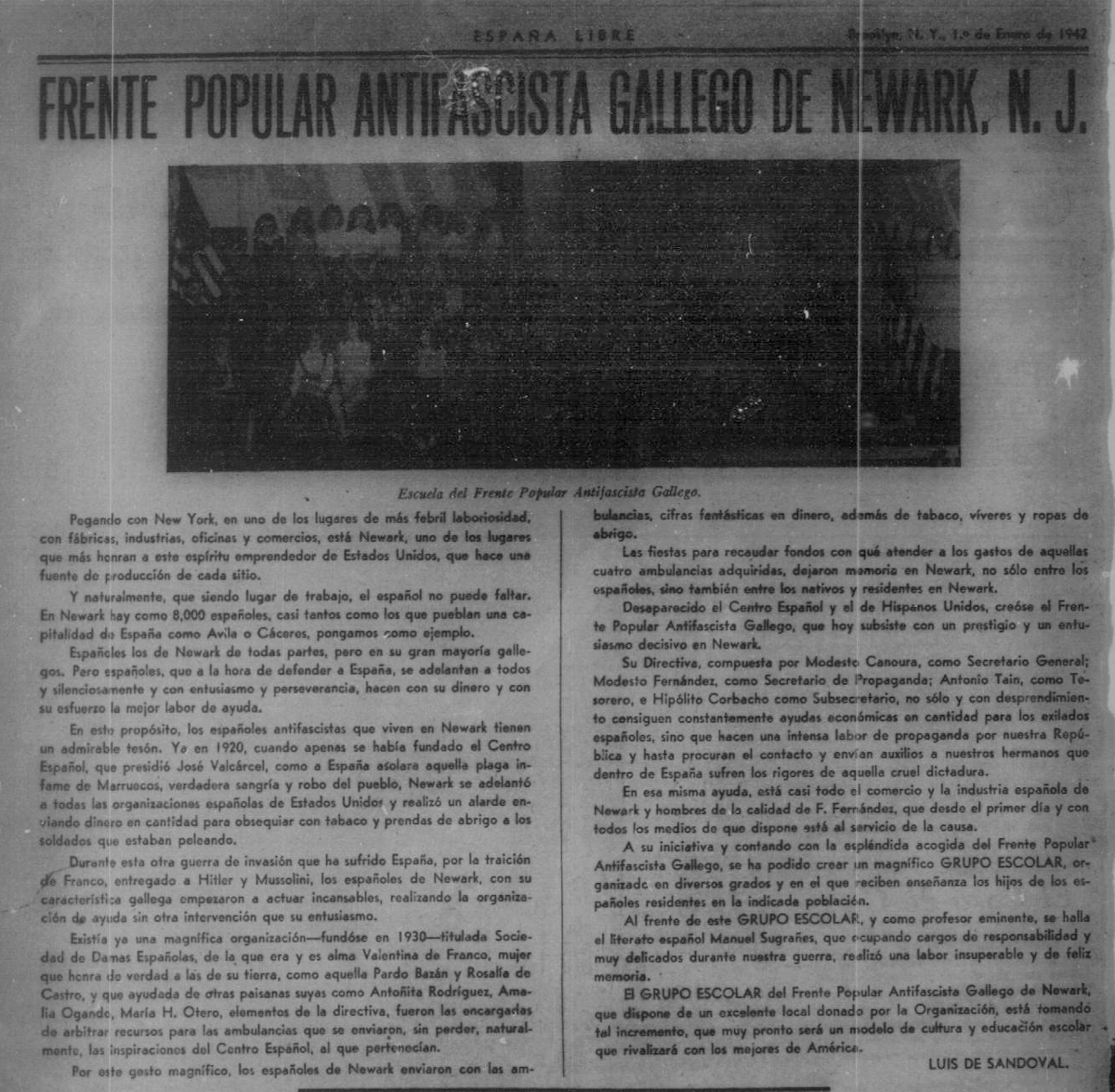 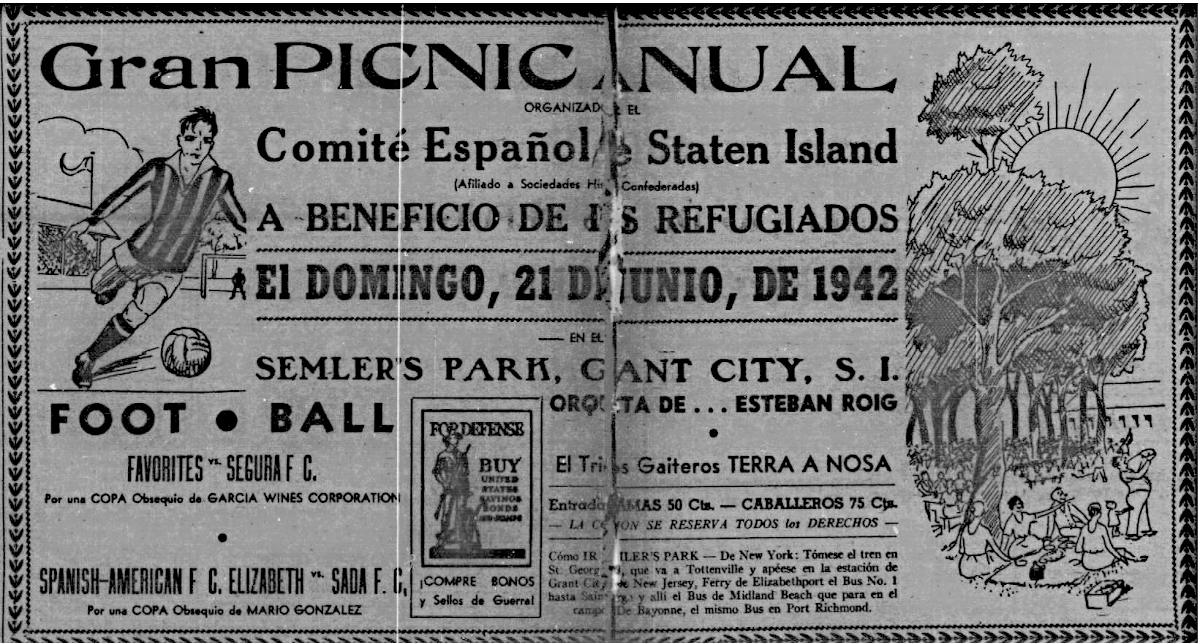 Announcement of an event to support Spanish refugees, including the Galician bagpipers Terra a Nosa, in España Libre (Arquivo da Emigración Galega) 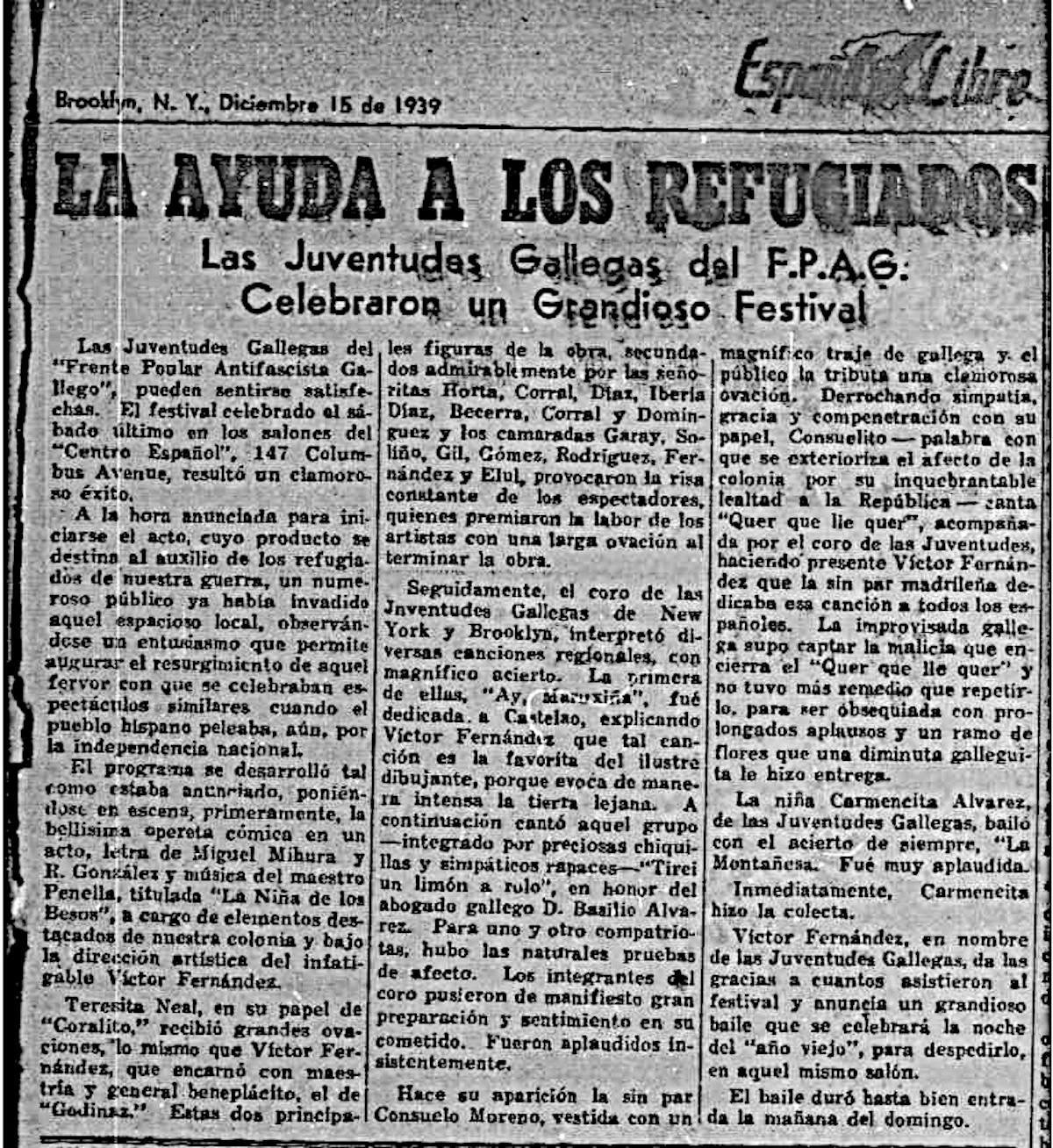 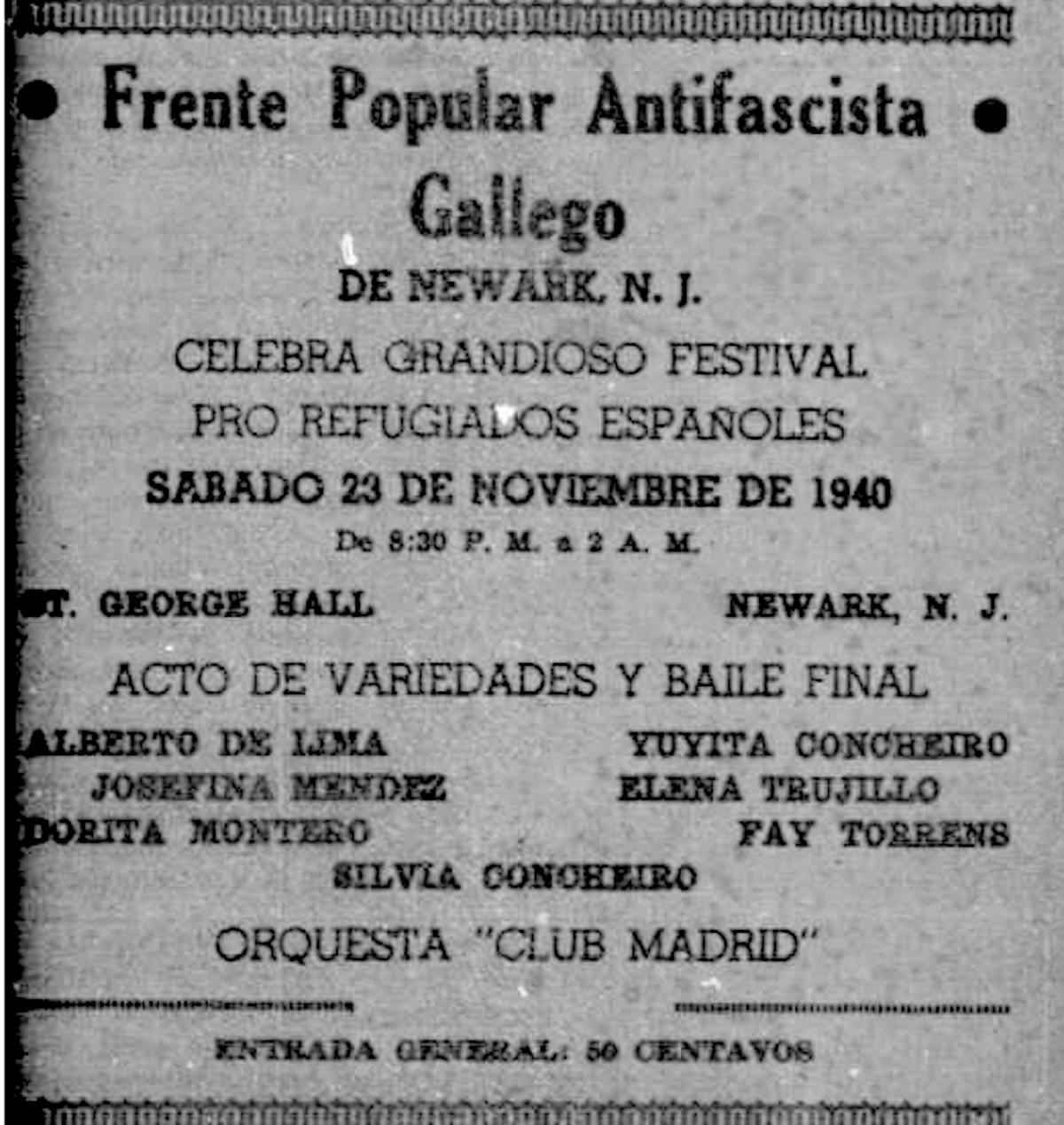 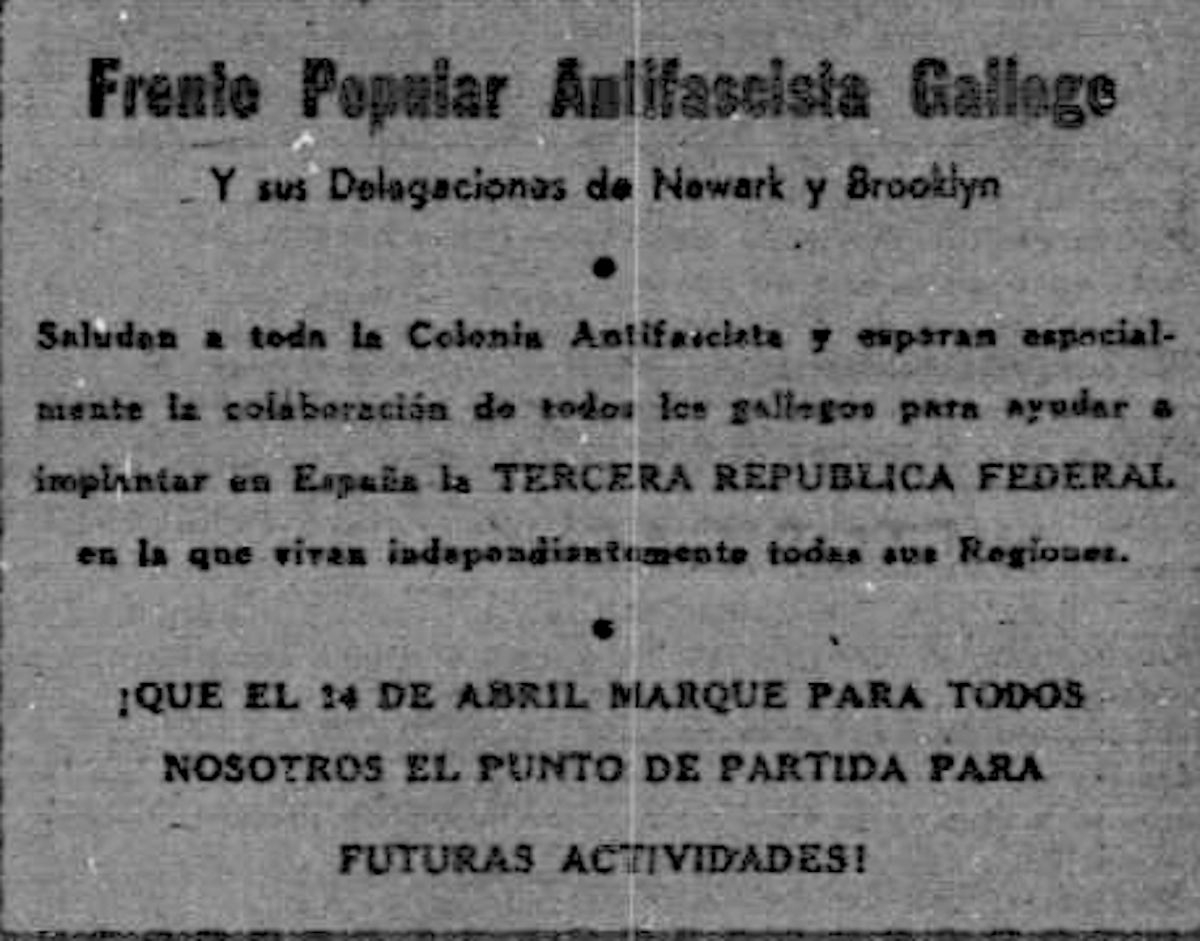 Next ->
New York in Galician Culture